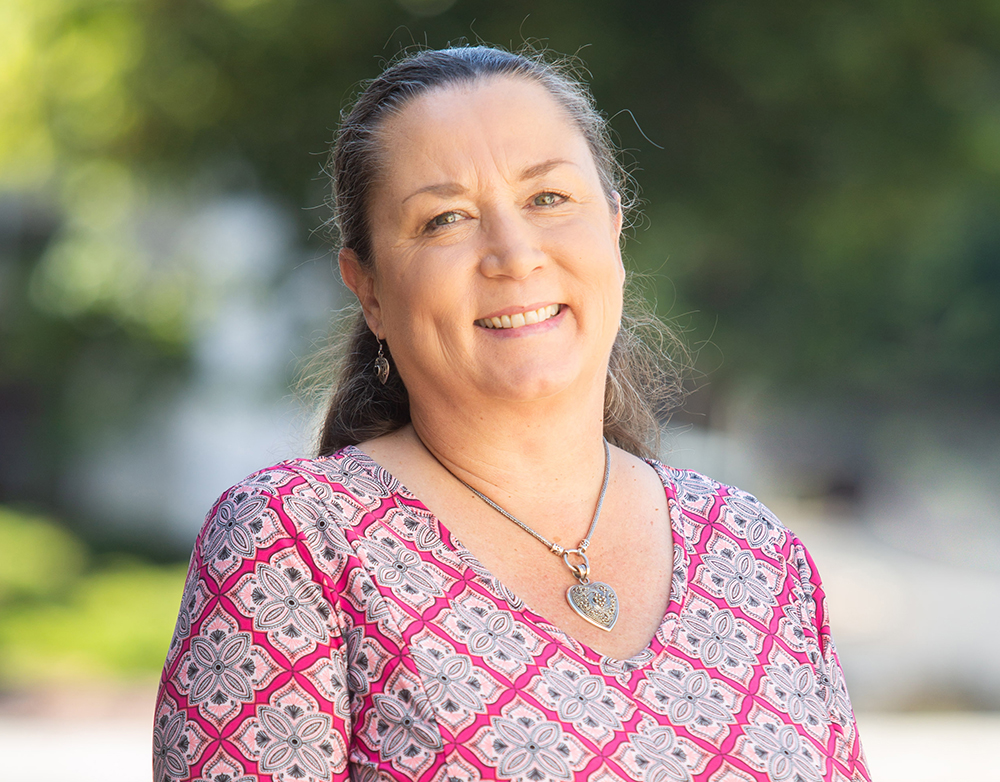 Karin Powers graduated from Cal Poly at the age of 40. If she had not been motivated by her back injury, she may have not attended college. She serves as the Finance and Human Resource Director for the North County Rape Crisis and Child Protection Center (NCRCCPC), where she has worked for the past 12 years and plans to stay until she retires.

The mission of the NCRCCPC—to reduce the incidence of and vulnerability to sexual assault, child abuse, and human trafficking by providing education and prevention skills to community children and adults and to alleviate the trauma experienced by survivors of these crimes by providing direct services—spoke to Karin on a deeply personal level. As a survivor of domestic violence and sexual assault, Karin understands the lifesaving value of her organization.

“To be able to give back and let survivors know that there is a non-judgmental, safe place for them to go is priceless,” she said.

When Karin talks about her work, it brings her to tears. “I’ve answered the crisis hotline for 10 years and accompanied victims during law enforcement interviews, forensic evidence collection, and court proceedings. As difficult as it is for me, it’s devastating for the survivors,” she explained.

Karin works with survivors in the North County of Santa Barbara. Her organization helps survivors use their voice to share their stories, enabling them to get the help they need.

Karin credits the Emerging Leaders program (ELP) with helping her find her own voice. When her executive director recommended she apply to the Leading From Within program, she was reluctant. She did not see herself as a leader. Eventually, she talked herself into participating, knowing it would be beneficial to “crawl out from under my rock.”

Little did she know, that decision would change her life.

“The Emerging Leaders program made me want to have a voice and made me realize that I did have a voice.”

“The Emerging Leaders Program (ELP) made me want to have a voice and made me realize that I did have a voice,” she said. She admits she was feeling dismissed and unappreciated by a coworker when she happened to attend a workshop featuring a guest speaker who said, “It’s not up to that person to see me as an equal but it’s up to me to see myself as equal.”

“That,” says Karin, “was the most aha moment of my life!”

As her confidence grew, so did her responsibility at the NCRCCPC. “At the beginning, I was working under the radar, feeling like I didn’t have a strong finance background and trying to prove I was worthy of the director title,” she said. “It took me a while to realize how much my opinion and knowledge of nonprofit management [were] respected.”

Karin is now part of a senior team at the rape crisis center. “One of the most powerful lessons I learned from the ELP is the importance of supporting our employees and eliciting honest feedback from them on a regular basis. They also have a voice that needs to be heard.”

“I’m still growing and I know I have 10 more years in this job. So why shouldn’t I push myself to do more and be more?” That’s one of the reasons she is active with the LFW Alumni Collaborative Leadership Council, which ensures that leaders in the North County continue to learn and grow together.

“When I started this journey, I didn’t see myself as a leader or a nonprofit professional, but ELP changed my life,” says Karin. “I’ve never been more comfortable in my own skin and I know that my voice matters.”